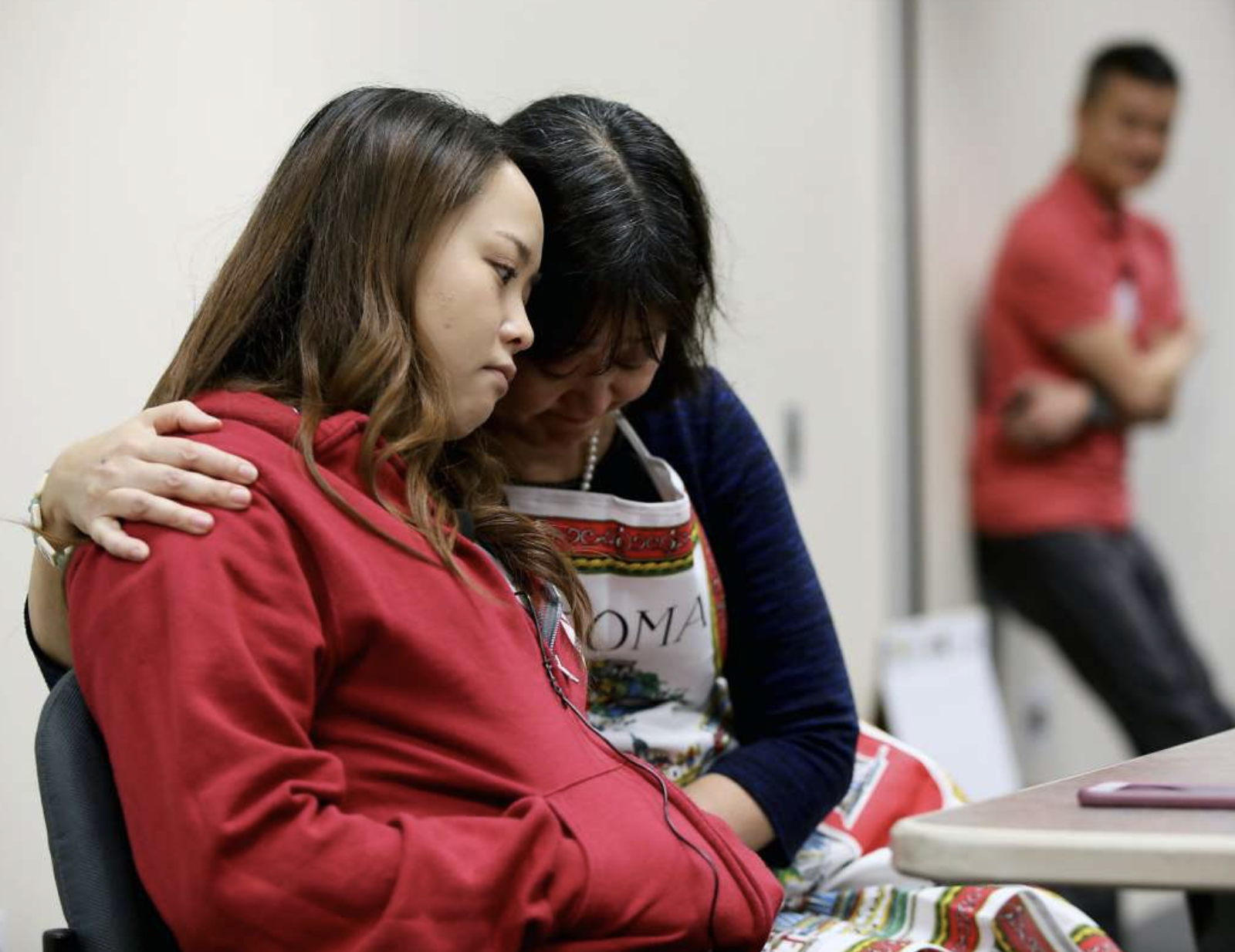 1of3Eun Kyung Joanne Lee (left), adjunct clinical instructor at Stanford, and Rona Hu, a Stanford University psychiatrist, perform a mother-daughter skit in the Milton Marks Auditorium at the state building in San Francisco. The two are part of CHIPAO, or the Communication Health Interactive for Parents of Adolescents and Others.Photo: Yalonda M. James / The Chronicle

The first day of school is on the horizon for Bay Area teenagers, and with the fresh notebooks and new locker combinations also comes a set of Asian American parents determined to change how their peers look at the taboo topic of mental health.

With depression and suicidal thoughts on the rise among American teenagers, psychologists say building honest communication between parents and their kids is key to addressing and treating mental illness. That can be especially difficult for Asian American families steeped in cultures that won’t openly address psychological problems. Instead, experts say, some may dismiss it or try to hide it like a family secret.

Rona Hu, a Stanford University psychiatrist, and Eun Kyung Joanne Lee, adjunct clinical instructor at Stanford, said Asian American parents often seem “strict and unforgiving.” They seek “easy solutions,” which could alienate kids in the end, over sitting down and asking children about their struggles.

“They want a simple solution, and all of a sudden, their kids are grown up and they don’t call anymore,” Lee said.

Many of those parents focused on the academic rigor of Bay Area high schools when they immigrated to the United States in search of better economic and educational opportunities. They sought chances to get their kids ahead, said Yi Ding, co-president of the Asian American Parents Association in Cupertino.

But as they settled and got more civically involved — and with the advent of the internet and social media — those parents realized a crucial component of enabling success is providing emotional support.

The 2014-15 school year, when four Chinese American teenagers in Palo Alto died by suicide, put that into sharp focus for parents and medical experts. A federal report released in the wake of their deaths found parents could take preventive measures by building better bonds with their kids.

In response to that, Hu, Lee and fellow medical researchers began experimenting with a different kind of therapy to help parents talk to their kids. The Communication Health Interactive for Parents of Adolescents and Others (CHIPAO) is a mental health initiative that role-plays scenarios between Asian American parents and their children. Hu and Lee, accompanied by fellow communication initiative trainers and psychology graduate students, perform the vignettes at high schools around the Bay Area at the invitation of local PTAs. Each scenario — failing a math test, coming out to their parents, bullying — is tested beforehand by psychologists who recall similar situations from their own teenage years.

CHIPAO is a homophone for qipao (pronounced cheePAO), a traditional Chinese silk dress worn to Lunar New Year parties and parades. The name is meant to normalize the idea that anyone can struggle with their mental health and that those problems are not character flaws, Hu said.

“We welcome everyone, but if it felt to them they would be the minority and judged, we wanted them to realize they would be in the majority and have good company with other Asian parents,” Hu said.

The programs typically draw hundreds of attendees. When Ding of the Asian American Parents Association reached out last fall to set up a seminar for South Bay parents, the organization almost instantly filled the 280 spots at the Quinlan Community Center in Cupertino.

Adding to the culture of silence, experts said, is that students feel like it’s normal to struggle with stress. Teens are raised to worry about their futures and impress their parents without acknowledging the toll a hypercompetitive environment takes.

“They think it’s part of what high school should be because they think others can do it — why not them?” Lim said.

Parents hope that mental illness will subside on its own by staying silent.

The Stanford psychiatrists said a large portion of parents are driven to seek better care for their teens the same way they would find a tutor for a kid struggling with homework. Parents sometimes don’t feel equipped to address mental illness the way a medical expert would.

But echoing the Palo Alto suicide cluster investigation, experts said family members are often the best people to help their kids because they can create a better line of communication.

A mother herself, Hu said showing Asian American parents how to talk to their kids constructively has reduced stress for teenagers juggling typical adolescent anxiety of who’s going with whom to prom as well as figuring out if they’re living up to a cultural expectation to be perfect at everything.

In the Milton Marks Auditorium in the state building on San Francisco’s Golden Gate Avenue, Hu and her “daughter,” played by Lee, broach a delicate subject in a role-playing vignette — what to do when a mom finds bloodstains on her daughter’s sweatshirt sleeves and a bright red bloody tissue hidden in a wastebasket.

“I need to know if you’re doing something stupid,” Hu said, shaking a crimson-dyed tissue at Lee as the younger doctor feigns sullenness, tapping away at her phone.

“What’s wrong with you?” Hu cried. “I almost pretended I didn’t see them.”

A regular teen would have snapped back, clammed up, refused any and all prying eyes, even if she were seeking help, the duo said, as Lee turned away from her “mother.” In the audience, nearly 80 mental health professionals and parents nodded along.

But before Hu went any further in the vignette, another CHIPAO trainer stepped in to intervene and ask why Hu had reacted to her daughter’s cutting with such harsh words, and suggested instead gently probing about what had led up to the self-harm. Any worried parent, the trainer explained, might have made that impulsive choice to be confrontational.

“I remember seeing the eyes of parents in the audience and they were all thinking, ‘I would have probably asked that,’” Hu said.